Is it True Rowan Atkinson (Mr Bean) convert to Islam? 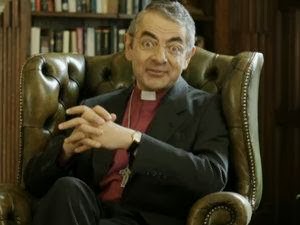 Here is the result in google with keyword: rowan atkinson convert to islam. There is no big mass media in the first page:

To get the true information, the mass media must ask information directly to Rowan Atkinson. Or quoting from the reliable Media that could do that:

“O you who have believed, if there comes to you a disobedient one with information, investigate, lest you harm a people out of ignorance and become, over what you have done, regretful. ” [Al Hujuraat 6]

Somehow many Celebrities such as Muhammad Ali, Jermain Jackson, Cat Stevens, etc have joined Islam. We hope many people will follow:
http://mediaislamraya.blogspot.com/2011/08/muslim-celebrities-in-hollywood-and.html

No, We Do Not Believe Rowan Atkinson Converted To Islam

Posted by: Aussie Dave  in Aussie Dave October 2, 2013  0 10 ViewsMy Batsh*t Crazy Claim Of The Day: Rowan Atkinson Converted To Islam post has quickly become perhaps the most “popular” Israellycool post ever. Traffic has gone through the roof. Tens of Muslims have ‘liked’ our Facebook page. And despite the title and content of the post – in which I clearly point out why the claim ridiculous – thousands of Muslims around the world have shared, retweeted and linked to the post, as evidence that Rowan Atkinson has converted to Islam! (here is one example)I guess they will believe what they want to believe.Meanwhile, no word from Atkinson himself because – as I have made clear – the claim is almost certainly false.

On the link above Israellycool.com also contacted Lucy, Rowan's agent about the matter. Lucy wrote: "Rowan has not converted to Islam"


Is Madonna Studying the Quran?